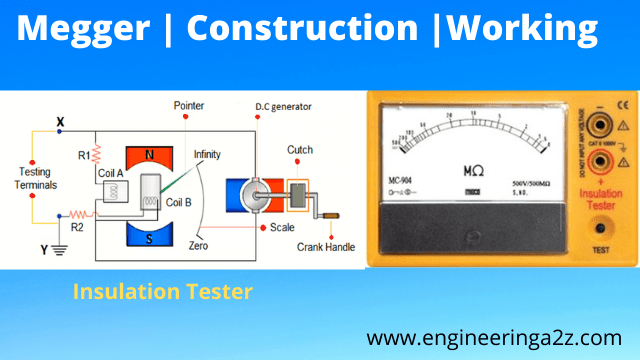 The most portable insulation tester is Megger. It is used to test extremely high resistance in the megaohm range. Megger is expert in ground earth testing. It gives high accuracy. This test is easy to use and having light weight. Megger is used to determine the leakage current and verifying the insulation level.

It is made up of two major components: a DC generator and an ohm-meter. The hand rotated generator rotates at roughly 140 to 160 rpm and generates voltages of 500 to 1000 V or 2000 V, as specified by the megger’s design.  It’s also known as a dynamo generator or a magneto generator. Figure shows a megger’s circuit diagram

The magnetic field for both i.e., generator as well as meter is provided by the permanent magnets. The moving system of megger consists of three coils: current coil, pressure coil and compensating coil, which are mounted rigidly on a pivoted shaft which are free to rotate over a C-shaped iron core. The coils are connected to the circuit by means of flexible wires (ligaments), that exert no restoring torque on the moving system. Hence the moving system may take up any position over the scale when the generator handle is stationary.

When current from the generator passes through P.C., the coil tends to align itself with the permanent magnet’s field. No current flows through the deflecting coil when the test terminals L and E are open, equating to infinite resistance. The torque created turns the megger’s moving system until the scale reaches infinity, indicating that the external circuit’s resistance is much too high for the instrument to measure.

The ohm-meter, which measures resistance in mega ohms, is another component of the instrument. It is made up of two moving coils that are positioned at an angle to each other. These coils rotate between two poles of a permanent magnet with the help of a spindle and jewels.

Both the current coil and the pressure coil are made of fine wire with a few turns and are linked to the circuit via series and parallel resistances R1 and R2 as shown in the diagram. The centre of both coils has a pointer that indicates the reading on the scale from infinity to zero. L and E are the two terminals on Megger.

Between the test terminals L and E, the resistance under test is connected. The generator handle is then rotated at an uniform speed. The handle must be turned continuously until the pointer delivers a consistent reading. The resistance on the scale is measured in mega ohms.

Digital Electronics : Logic Gates (AND, OR, NOT, NAND, NOR, XOR, XNOR)
Next Article 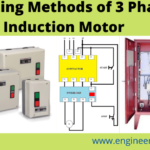