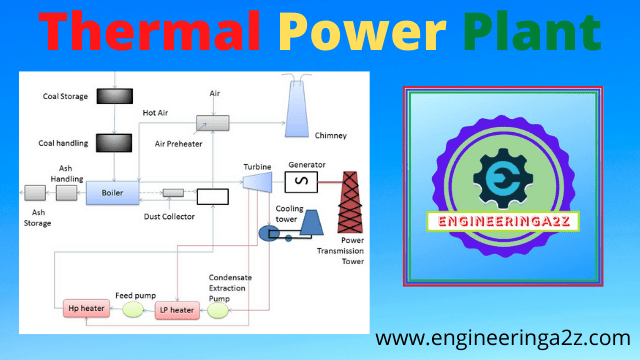 The thermal power plant is main source of electric power generation in our country. In this power plant, the heat energy is converted into electric energy. The heat energy generated by burning of fuel mostly coal is used to heat water and generates steam. This generated steam runs turbine and this turbine works as a prime mover, gives mechanical power to the alternator. Thermal power generation requires coal and enough quantity of water for cooling purpose.

The working of thermal power plant starts with the arrival of coal. Coal stored in a coal storage passes to the furnace through the coal handling plant for the generation of heat energy, and the ash resulting from combustion of coal collected at the back of boiler and is removed to the ash storage yard through ash handling equipment. The heat energy generated by the burning of coal is used to heat the water in the boiler and converts it into a wet steam.

Boiler is used for producing steam under pressure. Water tube boilers are generally used for this purpose.

It convert wet steam into superheated steam .Steam is superheated in it before passing from the boiler to the prime movers to attain an increased efficiency.

In economiser, heat in flue gases is partially used to heat incoming feed water. It makes use of remaining heat of the gases in heating the feed water.

The function of the turbine is to convert the heat energy of steam into mechanical energy of the shaft. Turbine works as a prime mover for the generator.

In the condenser, low pressure steam is condensed into water. It condenses steam used by the steam turbine. The condensed steam known as condensate is used as a feed water.

Make up water in the raw form is passed through evaporator which hears it to steam and is then condensed back to water, which then enters the feed water system.

It pumps water in the water tubes of boiler against boiler steam pressure.

The steam power plant for generation of electric power is preferred, where large amount of power is required to be generated (normally in the form of AC at about 11.000 volts) and financial, climatic and geographical conditions do not permit the installation hydroelectric power plant whereas coal is available in plenty. 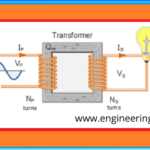 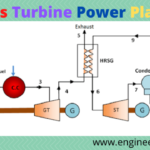